The Monthly launched in 2005. It is Australia’s foremost magazine on politics and culture. It publishes this country’s leading writers, and every issue drives and reflects the national conversation.

At the magazine’s launch, publisher Morry Schwartz said The Monthly would be marked out by its independence. It would be socially and politically progressive; concerned but never wet; open-minded and courageous. More than anything, it would be defined by good writing.

“The Monthly will aim to capture the essence of Australia, both as it was and as it is,” Schwartz said. “It will cover the significant political, social and cultural tides … The conception of this magazine was prompted by the fact that nothing like it exists nor really ever existed in Australia.”

The Monthly has published key journalism on everything from the Gunns pulp mill in Tasmania to the death in custody of Cameron Doomadgee on Palm Island. As a forum for ideas, it has carried agenda-setting essays from intellectuals such as Galarrwuy Yunupingu and Robert Manne. Kevin Rudd began his push for the prime ministership in its pages and wrote his inside account of the global financial crisis for its cover. The magazine later carried a forensic account of how he undermined the leadership of his predecessor.

From its inception, The Monthly has never compromised its editorial standards. It is edited more like a book than a magazine. Its contributor list is a rollcall of Australia’s key writers: Helen Garner, Richard Flanagan, David Marr, Don Watson, Chloe Hooper, Tim Winton, Christos Tsiolkas, Noel Pearson, Anne Manne, Robert Manne, Karen Hitchcock, Anwen Crawford, Anna Goldsworthy and J.M. Coetzee. As Schwartz says: “Without our writers we are nothing.”

The Monthly was launched to give writers, commentators and critics the time and space to explore the issues that matter now and will matter in the future, to distil complex arguments and ideas in ways that entertain and inform. Like its sister publications, Quarterly Essay and The Saturday Paper, it values great writing and treats it well.

Schwartz once described The Monthly as “a free spirited friend who comes to visit, full of stories, opinion, information, insight and surprise”.

The Monthly Today is the essential telling of the day’s politics. Arriving mid-afternoon – after Question Time on sitting weeks – it analyses what is happening in national affairs and gives a unique take on what it means and why it matters. It is spirited and fresh, cutting through the politics to keep readers up to date. 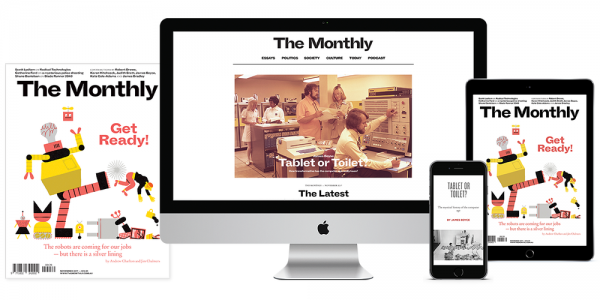 Intelligent people make time for quality. They demand deeper engagement with the world of politics, society and culture.

The Monthly features the nation’s leading writers and thinkers. Leaders in business, politics and the arts, from prime ministers to chief executives, consider The Monthly essential reading.

Readers of The Monthly are in the top tier in education, income and occupation.